A Story behind IoE @ THINGS EXPO

This post is related to the published visuals from my Internet of Everything session at THINGS EXPO in June 2014 in New York City. The story is relevant to the visuals but there is no firm affinity to particular imagery. Now there story is more like a stand alone entity.

How many things are connected now?

Guess how many things (devices & humans) are connected to the Internet? Guess who knows? The one who produces those routers, that moves your IP packets across the global web – Cisco. Just navigate to the link http://newsroom.cisco.com/ioe and check the counter in right top corner. The counter doesn’t look beautiful, but it’s live, it works, and I hope will continue to work and report approximate number of the connected things within the Internet. Cisco predicts that by 2020, the Internet of Everything has the potential to connect 50 billion. You could check yourself whether the counter is already tuned to show 50,000,000,000 on 1st of January 2020…

Internet of Everything is next globalization

Old good globalization was already described in The World is Flat. With the rise of smart phones with local sensors (GPS, Bluetooth, Wi-Fi) the flatness of the world has been challenged. Locality unflattened the world. New business models emerged as “a power of local”. The picture got mixed: on one hand we see same burgers,  Coca-Cola and blue jeans everywhere, consumed by many; while on the other hand we already consume services tailored to locality. Even hard goods are tailored to locality, such as cars for Alaska vs. Florida. Furthermore, McDonald’s proposes locally augmented/extended menu, and Coca-Cola wraps the bottles with locally meaningful images.

Location itself is insufficient for the next big shift in biz and lives. A context is a breakthrough personalizer. And that personal experience is achievable via more & smaller electronics, broadband networks without roaming burden, and analytics from Big Data. New globalization is all about personal experience, everywhere for everyone.

Today you have to take your commodities, together with made good, together with services, bring it all onto the stage and stage personal experience for a client. It is called Experience Economy. Nowadays clients/users want experiences. Repeatable experiences like in Starbucks or lobster restaurant or soccer stadium or taxi ride. I already have a post on Transformation of Consumption. Healthcare industry is one of early adopters of the IoT, hence they deserved separate mentioning, there is a post on Next Five Years of Healthcare.

So you have to get prepared for the higher prices… It is a cost of staging of personal experience. Very differentiated offering at premium price. That’s the economical evolution. Just stick to it and think how to fit there with your stuff. Augment business models correspondingly. Allocate hundreds of MB (or soon GB) for user profiles. You will need a lot to store about everybody to be able to personalize.

Remember that it’s not all about consumer. There are many things around consumer. They are part of the context, service, ecosystem. Count on them as well. People use those helper things [machines, software] to improve something in biz process or in life style, either cost or quality or time or emotions. Whatever it is, the interaction between people and between people-machine is crucial for proper abstraction and design for the new economy.

Creator of Berkeley Unix, creator of vi editor, co-founder of Sun Microsystems, partner at KPCB – Bill Joy – outlined six levels of human-human, human-machine, machine-machine interaction. That was about 20 years ago.

About 10 years ago Bill Joy reiterated on Six Webs. He pointed to “The Hear Web” as most promising and exciting for innovations.

“The Hear Web” is anatomical graphene

The human body is anatomically the same through the hundreds of years. Hence the ergonomics of wearables and handhelds is predefined. Bracelets, wristwatches, armbands are those gadgets that could we wear for now on our arms. The difference is in technology. Earlier it was mechanical, now it is electrical. 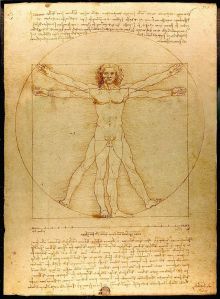 We are still not there with human augmentation to speak about underskin chips… but that stuff is being tested already… on dogs & cats. Microchip with information about rabies vaccination is put under the skin. Humans also pioneer some things, but it is still not mainstream to talk much about.

For sure “The Hear Web” was a breakthrough during recent years. The evolution of smartphones was amazing. The emergence of wrist-sized gadgets was pleasant. We are still to get clarity what will happen with glasses. Google experiments a lot, but there is a long way to go until the gadget is polished. That’s why Google experiments with contact lenses. Because GLASS still looks awkward…

The brick design of touch smartphone is not the true final one. I’ve figured out significant issue with iPhone design. LG Flex is experimenting with bendable, but that’s probably not significantly better option. High hopes are on Graphene.    Nokia sold it’s plastic phone business to Microsoft, because Nokia got multi-billion grant to research in graphene wearables. Graphene is good for electricity, highly durable, flexible, transparent. It is much better for the new generation of anatomically friendly wearables.

BTW there will be probably no space for the full-blown HTML5/CSS3/JavaScript browsers on those new gadgets. Hence forget about SaaS and think about S+S. Or client-server which is called client-cloud nowadays. Programming language could be JavaScript, as it works on small hardware already, without fat browsers running spreadsheets. Check out Tessel. The pathway from current medium between gadgets & clouds is: smartphone –> raspberry pi –> arduino.

D2D stands for Device-to-Device. There must be standards. High hopes are on Qualcomm. They are respected chipset & patents maker. They propose AllJoyn – open source approach for connecting things – during recent years. All common functionality such as discovery/onboarding, Wi-Fi comms, data streaming to be standardized and adopted by developers community.

AllSeen Alliance is an organization of supporters of the open source initiative for IoT. It is good to see there names like LG, Sharp, Haier, Panasonic, Technicolor (Thomson) as premier members, Cisco, Symantec and HTC as community members. And really nice to see one of etalons of Wikinomics – Local Motors!

For sure Google would try to push Android onto as many devices as possible, but Google must understand that they are players in plastic gadgets. It’s better to invest money into hw & graphene companies and support the alliance with money and authority. IoT needs standards, especially at D2D/M2M level.

How to design for new webs?

If you know how – then go ahead. Else – design for personal experience. Internet of Everything includes semiconductors, telecoms and analytics from Big Data. 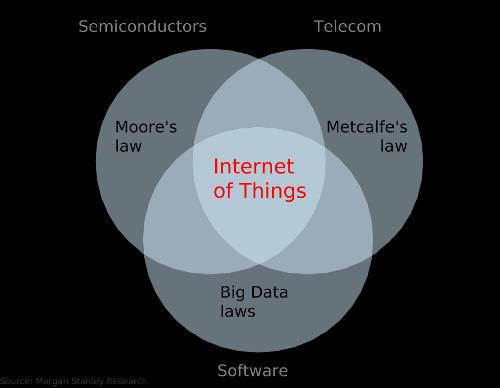 Assuming you are in software business, let semiconductors continue with Moore’s Law, let telecoms continue with Metcalfe’s Law, while concentrate on Big Data to unlock analytics potential, for context handling, for staging personal experience. Just consider that Metcalfe’s Law could be spread onto human users and machines/devices.

Start design of Six Graphs of Big Data from Five Sources of Big Data. The relation between graphs and sources is many-to-many. Blending of the graphs is not trivial. Look into Big Data Graphs Revisited. Conceptualization of the analytics pipeline is available in Advanced Analytics, Part I. Most interesting graphs are Intention & Consumption, because first is a plan, second is a fact. When they begin to match, then your solution begin to rock. Write down and follow it – the data is the next currency. 23andme and Uber logs so much data besides the cap of service you see and consume…

Where we are today?

There are clear five waves of the IoT. Some of those waves overlap. Especially ubiquitous identification of people or things indoors and outdoors. If the objects is big enough to be labeled with RFID tag or visual barcode than it is easy. But small objects are not labeled neither with radio chip nor with optical code. No radio chip because it is not good money-wise. E.g. bottles/cans of beer are not labeled because it’s too expensive per item. The pallets of beer bottles are labeled for sure, while single bottle is not. There is no optical code as well, to not spoil the design/brand of the label. Hence it is a problem to look for alternative identification – optical – via image recognition.

Third wave includes image recognition, which is not new, but it is still tough today. Google has trained Street View brain to recognize house numbers and car plates at such high level of accuracy, that they could crack captcha now. But you are not Google and you will get 75-78% with OpenCV (properly tuned) and 79-80% with deep neural networks (if trained properly). The training set for deep learning is a PITA. You will need to go to each store & kiosk and make pictures of the beer bottles under different light conditions, rotations, distances etc. Some footage could be made in the lab (like Amazon shoots the products from 360) but plenty of work is your own. 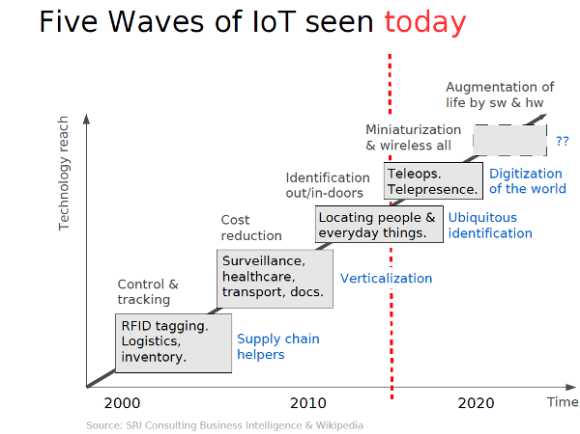 Fourth wave is about total digitization of the world, then newer world will work with digital things vial telepresence & teleoperations. Hopefully we will dispense with all those power adapters and wires by that time. “Software is eating the World”. All companies become software companies. Probably you are comfortable with digital music (both consuming and authoring), digital publishing, digital photos and digital movies. But you could have concerns with digital goods, when you pay for the 3D model and print on 3D printer. While atomic structure of the printed goods is different, your concern is right, but as soon as atomic structure is identical [or even better] then old original good has, then your concern is useless. Read more in Transformation of Consumption.

With 3D printing of hard goods it’s less or more understandable. Let’s switch tp 3D printed food. Modern Meadow printed a burger year ago. It costed $300K, approximately as much as Sergei Brin (Googler) invested into Modern Meadow. Surprised? Think about printed newest or personal vaccines and so forth…

Is Uber IoT or not? With human drivers it is not. When human-driven cabs are substituted by self-driving cabs, then Uber will become an IoT. There is excellent post by Tim O’Reilly about Internet of Things & Humans. CEO of Box.com Levie tweeted “Uber is a $3.5 billion lesson in building for how the world *should* work instead of optimizing for how the world *does* work.” IoT is not just more data [though RedHat said it is], IoT is how this world should work.

How to become IoT?

Check out There will be no End of the World. We will build so big and smart web, that we as humans will prepare the world to the phase shift. Our minds are limited. Our bodies are weird. They survive in very narrow temperature range. They afraid of radiation, gravity. We will not be able to go into deep space, to continue reverse engineering of this World. But we are capable to create the foundation for smarter intelligence, who could get there and figure it out. Probably we would even don’t grasp what it was… But today IoT pathway brings better experiences, more value, more money and more emotions.

Let’s check Cisco internet of things counter. ~300,000 new things have connected to the Internet while I wrote this story.